Originally from Fukushima Japan, Masayoshi Ishikawa grew up in a city called Aizu Wakamatsu. Throughout his primary and secondary school years, Ishikawa actively participated in several choirs. He came to the United States in 2003 to begin his formal musical training in Seattle Washington, where he first found his passion for piano and the art of jazz.

As a pianist, he 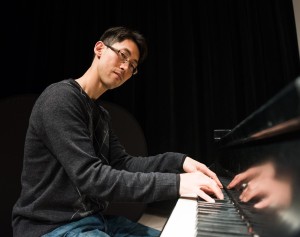 has performed at many jazz festivals/concerts including Italy, China and the United States. He was chosen to perform as one of the five finalists for 2016 Jacksonville Jazz Piano Competition. Ishikawa enjoys interacting and cultivating meaningful relationships with listeners and other musicians through performing music.

As equal to his dedication to jazz performance, Ishikawa is passionate about crafting music with various instrumentations. His composition, Hotaru (firefly), was selected as the winner of 2014 Downbeat Student Music Awards in Graduate Original Composition for Small Ensemble. His composition Wasururuka was also selected as one of the finalists for the International Composition Competition “Maurice Ravel” in 2016. Several of his compositions have been published from UNC Jazz Press (www.uncjazzpress.com)  Ishikawa received artist-residencies from Kimmel Harding Nelson Center (Nebraska-City, NE), Brush Creek Foundation for the Arts (Saratoga, WY), Caldera (Sisters, OR) as well as The Professional Mid-Career Artist Grant from Prairie Lakes Regional Arts Council.

Ishikawa wrote and premiered a multi-movement work titled Suite for the Forgotten in 2015. The suite is dedicated to people who are currently living in Fukushima under the uncertain health impact to the radiation exposure from The Fukushima Daiichi nuclear power plants meltdown in 2011. In this composition, Ishikawa employed a string quartet as well as French horn into the traditional jazz big band instrumentation. In order to keep raising awareness of Fukushima’s on-going issues, Ishikawa has been continuously presenting this work as a guest artist/composer at various institutions including Nebraska Wesleyan University (Lincoln, NE), Pacific Lutheran University (Tacoma, WA), Shoreline Community College (Shoreline, WA), as well as Smile for Japan (annual fundraising event held in Seattle, WA for those affected by Japan’s tragic Earthquake/Tsunami in 2011)

As a sincere respect to Stevie Wonder, one of his musical heroes, Ishikawa also premiered Stevie Wonder Recomposition Project in 2013. In this project, Ishikawa selected multiple Wonder compositions to recompose for chamber jazz ensembles with various instrumentations.